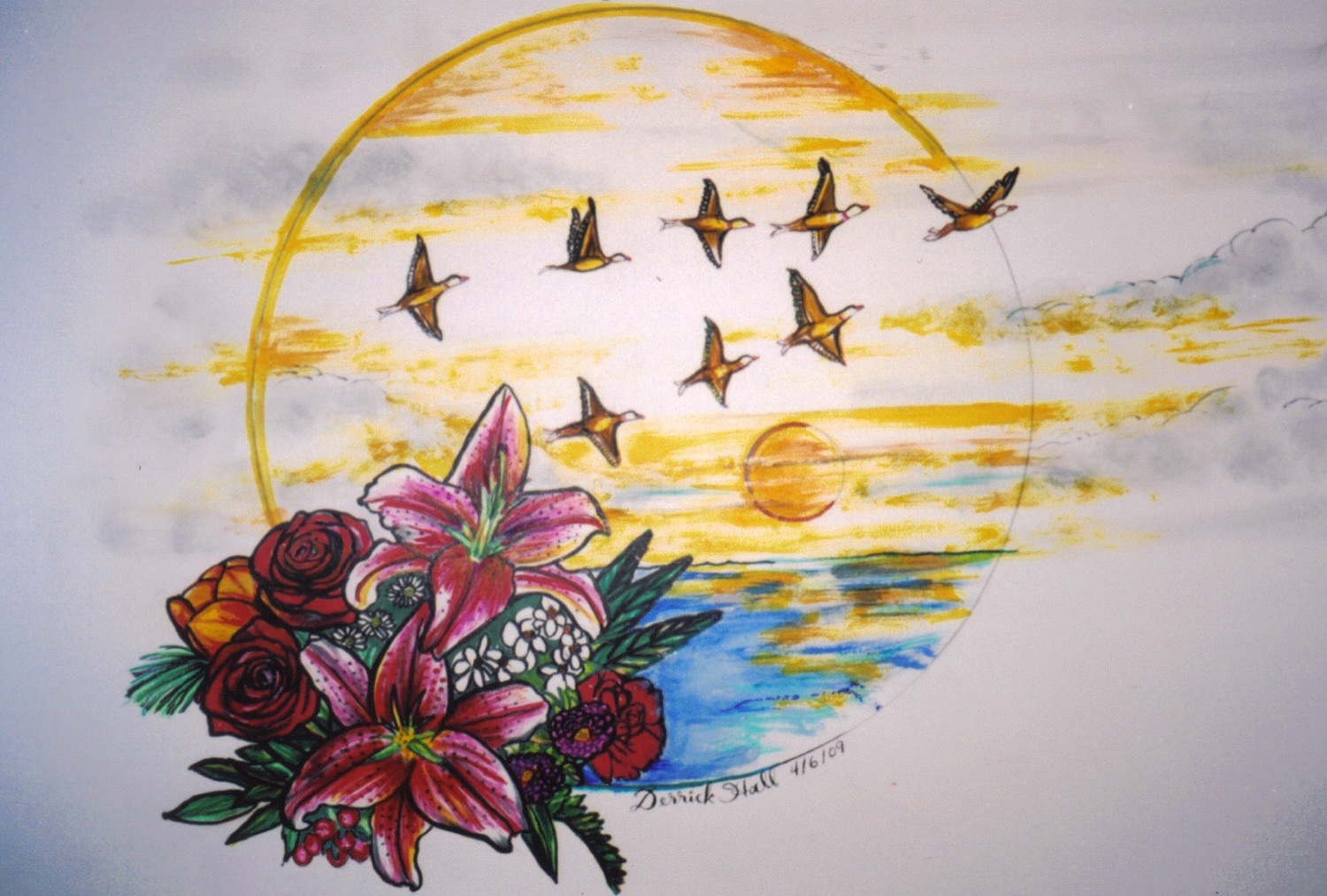 God gifted the world with Derrick Cornell Hall on February 24, 1954 in Chicago.
Affectionately called “Big D” and “Uncle D” by family and friends, he was the sixth of eight children born to Mildred (née Thurman) and Calvin Hall, Sr.

Derrick was raised in the Bronzeville neighborhood on Chicago’s South Side and attended Forrestville High School (now known as King College Prep). He often spoke about many fond childhood memories shared with family and friends on their 47th and Evans block.

Throughout his life, Derrick was always a creative person and developed a passion for art. He was enabled with a natural God-given talent and began drawing at the age of six. His father, Calvin, also an artist, taught him techniques that helped him cultivate his own unique style. Derrick derived inspiration for his paintings from what he called, “life visions.” As a result, his diverse art portfolio included portraits, landscape, nature, ethnic art, comics and themes that paid tribute to his favorite singers and musicians. He felt extreme joy when he was blessed to exhibit and sell his art at various local galleries and venues, including the Oak Park Arts District, Oak Park Art League, Robinson’s No. 1 Ribs and the annual Art in Motion charitable event at Shirley Ryan AbilityLab in Chicago.

Cooking was another passion that delighted Derrick. This motivated him to enroll in the culinary arts program at The Illinois Institute of Art in 2004 where he enhanced his chef skills. He also worked as a cook for several years in food service at the University of llinois at Chicago.

Always a romantic and devoted boyfriend, Derrick married his soulmate Anita Jackson on April 19, 2003. They shared unconditional love, a mutual affinity for the arts, and had fun cooking together and going on frequent foodie adventures to discover new restaurants and recipes.

More than anything, “Big D” had a big heart and loved his family, friends and church family at First Baptist Church of Oak Park. Before his health began to fail, he loved spending time talking, laughing and joking with all of them.

When imparting wisdom to others, words from one of his favorite songs, “Man in the Mirror,” resonated in his heart. Therefore, he had a special empathy and personal ministry for homeless people. Whenever he encountered a homeless person, he would stop to talk and get to know them as a human being— sometimes cooking and bringing them a meal. This also gave him an opportunity to witness and share his life’s journey. Before illness overtook him, Derrick had befriended many homeless people in Forest Park because they believed that he sincerely cared about them. When they stopped seeing him on the streets, many would often ask his wife, Anita, “Where’s the big guy?” They missed his calming presence. Derrick’s most important lesson from his life’s journey was that he never wanted people to think he was a perfect man, but that he was made a better man through God’s love and grace.

Derrick leaves a legacy of loved ones to celebrate and carry on the blessings of his life: His loving wife of 18 years, Anita Jackson-Hall; son, Derrick Watson; daughter, Valerie B.A. Watson; sister, Diana Jackson; brothers, Calvin Hall, Jr. and Yancy (Sandra) Hall; five precious grandchildren, Delayla, Damian, Naphtali, Kayla and Logan; and a multitude of nieces, nephews, and other family and friends.

In lieu of flowers, please direct memorial gifts in honor of Derrick Hall to the following charities:

The Art in Motion organizers will ensure any gifts received in honor of Derrick go directly to their art therapy programs:

Our prayers and condolences to Anita and her dear family. We always miss Derrick. He was such a nice brother with wonderful feelings, expressed in his art.

So sorry for your loss- will keep you and your family in prayer. May God give you peace and confort.

We are so sorry to hear of the passing of Derrick. We will remember is smile and the love he had for his art of painting. May his soul rest in peace.

Condolences and prayers of comfort for Anita and Derrick's family.

So sorry for your loss and grief, Anita and family. Rest in God's loving arms. We will miss Derrick.

May God's peace and comfort you during your time of grief. We will be keeping Anita and family in our prayers..Ivy & Steven Lloyd